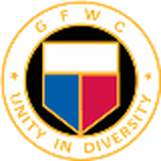 GENERAL FEDERATION OF WOMEN'S CLUBS
The General Federation of Women’s Clubs is an international women’s organization dedicated to community improvement by enhancing the lives of others through volunteer service.
Founded in 1890, GFWC’s roots can be traced back to 1868 when Jane Cunningham Croly (1829-1901), a professional New York journalist, attempted to attend a dinner at an all-male press club honoring British novelist Charles Dickens. Croly was denied admittance based upon her gender, and in response, formed a club for women. She chose the name Sorosis, a Greek word meaning "an aggregation; a sweet flavor of many fruits."  In celebration of Sorosis’ 21st anniversary in 1889, Jane Croly invited women’s clubs throughout the United States to pursue the cause of federation by attending a convention in New York City. On April 24, 1890, 63 clubs officially formed the General Federation of Women’s Clubs by ratifying the GFWC constitution. Since 1890, GFWC’s impact has been felt throughout communities across the Unites States and the globe.

CALIFORNIA FEDERATION OF WOMEN'S CLUBS
The California Federation of Women's Clubs, a member of the GFWC, unites women of all ages for community support of worldwide issues through California clubs, Junior Section and Juniorette (high school  and college) clubs. Divided into twenty-one districts with four leadership areas, the CFWC is responsible for contributing an average of 4 million volunteer hours and $3 million on 25,000 projects annually.  The CFWC goals are to encourage leadership and provide guidance in a variety of areas such as women’s health, prevention of family violence, child abuse prevention, and crime prevention. The CFWC strives to motivate and produce the kind of volunteers that will meet the needs of their communities and make a positive impact in California.
CFWC - ORANGE DISTRICT ​
The CFWC - Orange District is one of the 21 Districts in the state of California and consists of 22 Federated Clubs.
Powered by